MARKET DRAYTON AND RETURN FROM GAILEY

You can do this route from :
Gailey Wharf.

Cruise down the pretty Staffs & Worcs canal and along the Shroppie through the lovely Staffordshire countryside to the half timbered town of Market Drayton the home of Gingerbread! The town has some beautiful architecture from timber framed houses to a stunning 14th century sandstone church. On entering the town you pass over the pretty 40 Steps Aqueduct so called because of the 40 steps leading up from the road to the canal.


A very rural route with only a few locks. 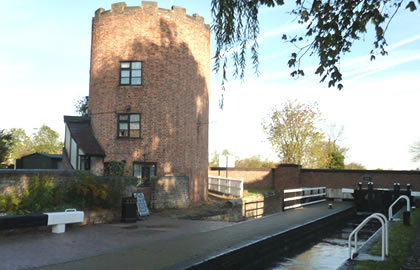 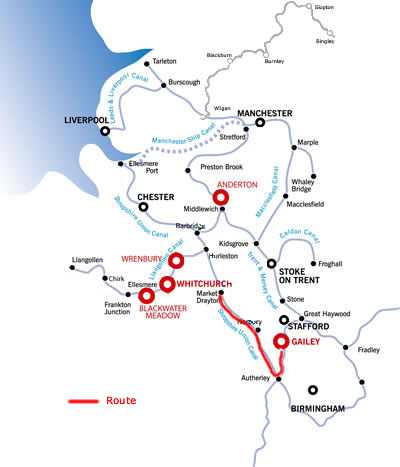 There is an attractive round Toll-keepers watch tower just above the lock, with a small canal shop on the ground floor.

The canal is very twisting through the countryside passing a very busy marina at Hatherton , the Fox & Anchor Inn is canalside at bridge 71 and as it is 2 hours cruising to here it might be a good place to moor up for the night.

Continue south to Autherley Junction, the M54 makes a brief intrusion but you soon pass under & away from from the rumble of traffic.

The Shropshire Union canal, or The Shroppie, starts the journey at Autherley Junction (turn sharp right) in the outskirts of Wolverhampton, known to the working boatmen as “Cut End” due to it being where the Shroppie met the much older Staffordshire and Worcestershire Canal,Autherley Junction was once a busy place with workshops, a toll office and stables, today Autherley has a boatyard with a hire fleet and a club house.

Many of the original buildings still exist and it is home to Bridge #1 on the Shroppie which is an original design by Thomas Telford. There is also the original shallow stop lock where Sam Lomas used to control boat movement and issue toll tickets. The lock has a drop of 1 inch, meaning no drop at all, so was purely used for Lomas's financial motives. Autherley is very attractive and full of canal history and it is worth giving yourself some time to look around!

Chillington Hall, close to the village of Brewood (pronounced Brood), is home to the “Fancy Bridge” named by the workers who built the Shroppie. Powerful landowners demanded grand and ornamental bridges where the canal crossed their properties and this is a fine example of such work. A tree lined avenue crosses the canal here leading up to Chillington Hall which is now a venue for Weddings. Just a short distance upstream from Chillington Hall is Brewood and you will find shops, pubs and restaurants close at hand and there is also a boatyard all of which should meet any of your requirements.

Just beyond Brewood you will see the Belvide Reservoir which supplies water for the canal. A very short distance from there is a cast iron aqueduct, the Stretton Aqueduct, which was built in 1832. It is used to cross the A5 Watling Street and take you onwards to Wheaton Aston where you will find the first lock on the Shroppie other than the stop lock at Autherley. The Wheaton Aston lock is unique by way of being the only singular lock on the canal route as the other locks are bunched together in "flights". This made for quicker working by the boat people because locks could be easily prepared in advance of the boats. At Wheaton Aston you will find a waterside garage that offers some useful facilities for boaters and a canalside pub. Wheaton Aston also has a few basic supplies.

Once past Wheaton Aston you are headlong into beautiful countryside passing through deep wooded cuttings and embankments that give views for miles. During this section you will only pass though a handful of hamlets. It is so rural and remote that you can get lost in the peace, disturbed only by a nosy herd of cows as you cruise by. You will pass through Cowley Cutting, a cutting that is deep, narrow and wooded. This section was originally intended to be a part of the Cowley Tunnel which takes you into Gnosall, but the ground was unstable so they opened this section out and made it the cutting it is today, and naturally it leads you straight into the tunnel which opens out into Gnosall, which is convenient for stocking up on supplies or stopping for a pint and a bite to eat and a good place to moor for the night as it will have taken you about 6.75 hours to here.

Onwards from Gnosall you find yourself heading towards Norbury Junction passing over the infamous Shelmore Embankment. It took 500 men and 50 horses 6 years to build the mile long embankment which is on unstable land. This was the last section of the canal to be completed and the reason for Telford to never see his final waterway opened. Troubled from the start this section had to be repeatedly repaired. Today it is covered in mature trees whose roots help with stability and there are also flood gates at either end of the embankment in case of a breach.
At Norbury Junction the Shroppie used to branch off to the Shrewsbury Canal via the Newport Branch and both of these are proposed for future restoration. In the one section of the Newport Branch that is still accessible there are moorings and a dry dock. Norbury is full of facilities including a British Waterways office and maintenance yard, a large pub, a café and a boatyard with a hire fleet and plenty of moorings. The Norbury area is very popular with walkers as it is a very pretty place with lots of wildlife. Expect it to be busy on a sunny day!

Heading north from Norbury you go through the mile long Grub Street Cutting known for the double-arched bridge which supports a telegraph pole. At the end of the cutting is High Offley, a small rural village with a lovely traditional canalside pub, the only civilisation along this stretch which is surrounded by fields and woodlands. There is also the high Shebdon Embankmentwhere you find another canalside pub. At the end of the Shebdon Embankment is the Knighton Cadbury's factory. This was opened in 1911 and they had a fleet of narrowboats to transport their goods to the Bournville site. The last load to be carried by boat was in 1961 by “Charlie Chocolate” Atkins in his boat Mendip which has recently been restored and can be seen at the Ellesmere Port museum.

Woodseaves Cutting and the impressive High Bridge is the next place on your journey. This is a magical place, particularly in Spring when the deep cutting echoes with birdsong, as it is now a Site of Special Scientific Interest because its geological importance. It is followed by Tyrley Wharfwhich marks the end of 17 lock-free miles with a flight of 5 locks which lower the canal by 10 metres.
The locks were built of stone cut from Woodseaves Cutting. Telford’s original design had two gates and in the 1840s these were replaced by the current design with only one gate. The lock cottage is typical of Telford’s designs and is similar to other toll houses that he designed. It is the only lock cottage which has survived relatively unchanged. The locks drop you down into the Tyrley Cutting which, with trees meeting overhead, resembles a green tunnel. Now onwards to Market Drayton.

Market Drayton, the home of Gingerbread, is a market town which holds a market every Wednesday. It is also a lively boating centre with many moorings to choose from and several boatyards. The centre of town is an easy walk from the canal and there are plenty of shops to purchase supplies from along with the market where you can pick up good local produce too. The town has some beautiful architecture from timber framed houses to a stunning 14th century sandstone church. On entering the town you pass over the pretty 40 Steps Aqueduct so called because of the 40 steps leading up from the road to the canal.
It is 6 hours cruising to here from Gnosall.

Take a leisurely cruise back to Gailey marina