Built in 1813 the canal is fairly short at only 25 miles long but it meanders through some of the most enchanting countryside in the very Heart of England. Cutting through the Forest of Arden with its ancient oaks to the quiet rolling countryside and water meadows to the Avon and onto Stratford. An unusual feature are the split bridges designed, when working boats navigated the route, to let the horse cross over the canal without being unhitched from the narrowboat. This delightful waterway is part of the Avon Cruising Ring.

Kings Norton Stop Lock - This stop lock was built to prevent water flowing from one canal to another. Despite having been disused since the 1950's the lock is complete with its guillotine gates and winching gear and is now left permanently opened.

Brandwood Tunnel - The tunnel is 352 yards long and took its name from the nearby Brandwood Estate. Look out for the elaborate trimmings and the plaque showing the image of William Shakespeare. The tunnel was built in the mid-1790s and is now a Grade II listed building.

Lapworth Junction and Lapworth Flight - Lapworth lies on the junction of two canals, the Stratford, and the Grand Union. The Flight consists of 26 locks with numbers 6 to 14 immediately next to each other.

Wooton Wawen – The canal runs through the centre of this pretty village and there are moorings for narrowboats at the Wootton Wawen Basin. Visit St Peter's Church which is the oldest in Warwickshire, the first church was built of timber and thatch but later rebuilt in stone.

Edstone (or Bearley) Aqueduct - An unusual construction because the towpath is on a level with the base rather than the lip of the trough - the result is that walkers are overtaken by the narrowboats passing at eye level. At 250 yard long and set in a cast-iron trough it is one of the earliest cast iron canal aqueducts in the country and is the longest in England.

Wilmcote - In around 1540 Mary Arden was born in Wilmcote and married John Shakespeare, moved to Stratford-upon-Avon, and gave birth to her son William Shakespeare. Mary Arden's House is open to the public and it houses a museum of countryside life.

Bancroft Basin – Is home to nearly all things Shakespearian see where the famous bard lived and watch a performance of one of his works at the Royal Shakespeare Company's world-renowned waterside theatre. 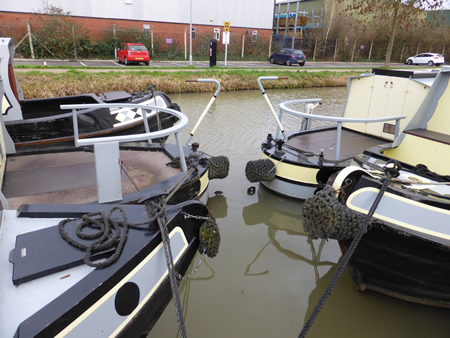