Built in 1875 by Edwin Clarke the Anderton Boat Lift is known as the cathedral of the canals. Situated on the banks of the River Weaver in Cheshire the lift was used for over 100 years until it closed due to corrosion in 1983. After restoration the lift was re opened in 2002 and now hosts a visitor centre and boat trips.

The 60ft high hydraulic lift system transports narrow boats and working boats from the Trent and Mersey canal to the River Weaver and vice versa. Built when the salt industry was still an important part of the Cheshire way of life the lift provided a direct link between the canal and river in a bid to make both waterways more profitable.

The Visitor Centre is opened seven days a week, view the boat lift working up and go one one of the guided boat lift trip.

Browse in the gift shop or have a cup of tea in the cafe. Take advantage of the outside areas, located in the impressive shadow of this mighty structure, to have a picnic.

Rock salt occurs naturally in Cheshire and was laid down during the Triassic Period, 255-190 million years.For over 2,000 years salt has been produced in Cheshire and it is the only place in Britain where it is still produced. Learn how salt has been produced with a visit to the Salt Museum at nearby Northwich. In the River Weaver gallery hear the story of the River Weaver and the lives of those who worked and lived alongside it. Established by Thomas Ward and John Brunner these two local salt proprietors felt that Northwich needed something to explain its importance as the 'salt capital of the world'.

A park converted from industrial wasteland the Anderton Nature Park is now a wildlife haven. There are many walks and you can follow the trail posts with information about the flowers and plants which can be found in that area. Unusual plants thrive in the salt, lime and ash clinker conditions, hemlock and the great willow herb grow in the wet soil along the river.

The rare Penny Royal, which gives off a mint smell are found in the grassy areas. Plants normally only found on the coast, the sea spurrey and salt grass grow here because of the salt which is found in the soil here quite naturally creates the conditions that these plants need.

The builders of the 1,300ft-long Saltersford Tunnel on the Trent and Mersey Canal near Northwich, Cheshire, didn't quite succeed in meeting in the middle the result is that there is a kink in the tunnel. The Saltersford Tunnel is thought to be one of the most haunted tunnels on the canal system. Boatman who knew of its reputation would not to tackle the tunnel alone 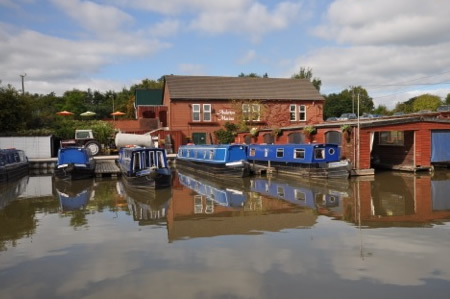