CHIRK AND RETURN FROM WHITCHURCH

This very beautiful canal is one of the most popular Waterways in Europe, and includes the Chirk Aqueduct an impressive structure built by Thomas Telford, which is 70 feet high, and beside it at 100 feet high is an impressive Viaduct built in 1848 to take the Shrewsbury & Chester Railway across the valley.

The Chirk Tunnel is 1,377 feet in length, and once through this you can moor up and walk to Chirk Castle, a 700 year old Castle managed by the National trust.


Ellesmere is a busy 18th century market town with delightful pubs and restaurants, also a variety of shops. 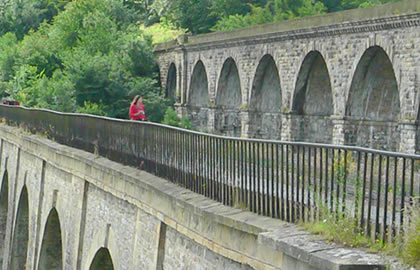 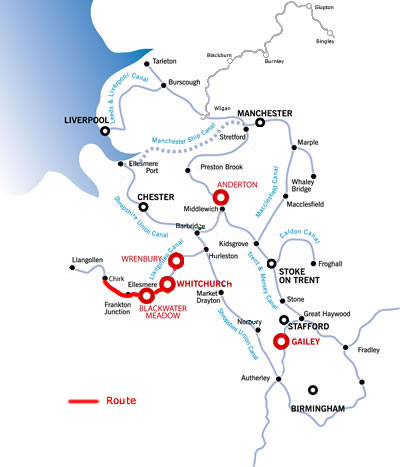 Cruise through the open countryside until bridge 43 in the village of Platt Lane.
Cruising time to here 2 hours.

Continue your cruise and you will shortly reach Whixall Moss, a raised bog with rare insect and plant life, but there might be mosquitoes as well! The bog was also formed during the Ice Age. There are walks & cycle routes over Whixall Moss, see leaflets near bridges 44 & 45.
There is a lovely lift bridge at bridge 45.

The canal branches away to your left but Prees Branch only leads to a nature reserve & a marina, so keep right.
The canal passes into England and then into Wales, going backwards & forwards past a remote and unpopulated area. At bridge 48 is the small village of Bettisfield, there is a stores here & off-licence.

Soon the open countryside gives way to more hilly wooded landscape as you start to pass through the Meres that make this area famously called the mini Lake District.
Cole Mere is the first on your left, then Blake Mere further on your right. The largest Mere is by Ellesmere itself, you can walk to it from Bridge 57 just after the short Ellesmere Tunnel. The Meres were carved out during the Ice Age.

You will soon be approaching Ellesmere, and a fine old warehouse and small canalside crane, and old canal company offices, testify to the canal trading that used to be carried out from here.

Ellesmere is a busy 18th century market town with delightful pubs and restaurants, also a variety of shops and a Co-op. You can moor along the canal or down the Ellesmere arm, off to your right.

It is 5.5 cruising hours to here

From Ellesmere the country once again becomes quiet and rural until you pass the Montgomery canal at the Frankton Junction. This canal is restored for about 7 miles. To enter the canal there are 4 locks called the Frankton Locks, and these are only opened by a lock-keeper between 12-2pm (Please check hours when booking). 48 hours notice of passage is required. Only boats with a booking will be allowed through the locks. Please note that no passages will be allowed outside of the published hours. To book a passage call 01606-723800 during normal office hours from Monday to Friday.

If you want to stop off there is a pub coming up after a tricky bridge (No 4)- the Narrow Boat Inn, just before the Maestermyn Marina at Whittington.

Alternatively there is another lovely canalside pub at bridge 11, the Jack Mytton Inn, Hindford, both serve good food & beer.

Shortly after Bridge 11, you will come to your only locks on this part of the Canal. There are 2 locks quite close to each other.

If a boat has just come through, past you, you are in luck, as the lock is with you, and you can open the gates and go straight in.
Get your crew out just before the lock, and make sure they have the windlass to operate the lock gates, as you were shown in the training.

After the 2nd lock on the right hand side, you can moor up and fill up with water if needed ( you will need the British waterways key that is on your bunch of keys). Water points are marked on your map along the canal.

A bit further on, after Bridge 15, there are some very posh moorings outside the Lion Keys Pub & restaurant, just before you go under the A5 road. There are 20 moorings for customers.

You will start to see less cows & sheep & see more houses now, as you are approaching the town of Chirk.
At Bridge 21 you can moor up and walk to the Bridge Inn, the last pub in England, before you cross the Chirk Aqueduct into Wales. Make sure there is no-one coming over the aqueduct.

The Aqueduct is 70 feet high and was built between 1796 and 1801 by Thomas Telford & William
Jessop, it is a practise run before you get to the Pontcysyllte Aqueduct, but it is very beautiful in itself, and crosses over the River Ceiriog.

It is not as frightening as you would think, with spectacular views of the River cascading down the valley below, and the Chirk Viaduct above you, as the aqueduct is only wide enough for one boat, make sure there is no boat crossing before you go over it.

You cannot go very fast across the Aqueduct, so just enjoy the view, as very soon you come to the end, and the beginning of the Chirk Tunnel, which at over 400 metres is one of the longest tunnels on the waterways system to have a towpath running through it.

After the tunnel moor up & you can walk back into Chirk & explore the town which has many historical buildings and to help you see them a fascinating town trail has been devised.

If you want to first visit the fantastic medieval Chirk castle moor up just after Chirk Tunnel , walk along the road westwards (right) to the castle gates, it is about a 20 minute walk but well worth it. This magnificent 700 year old fortress was built by Edward the 1, and has family apartments, state rooms, servants quarters and dungeons which can be viewed.

It is 5 hours cruising to here from Ellesmere.

Do not be tempted to stay the night here, as Cadburys have a site near here hidden by the trees, as does a large sawmill, so you might not get any sleep as they seem to work all night!!

Instead turn around at the next turning circle which you will reach very shortly, or if you miss that turn in the entrance to the marina, and then go back through the tunnel and over the aqueduct and moor near the first pub in England, The Bridge Inn, before Bridge 21. You can still walk to Chirk from here, but it is farther from the castle.

It is 9.75 hours back to the marina from Bridge 21, so you can cruise that in a day, or moor up somewhere after Platt Lane & set off early on your day of departure and cruise for an hour or so to get to Whitchurch marina. Note- Blackoe bridge 40 is an hour from the marina.