Edinburgh Castle is situated at the top of the royal mile and is the top visitor attraction in Scotland. Edinburgh castle has played a leading role in the history of Scotland for centuries with occupation of the site going back going back as far as the bronze age. try to time your visit to the castle to see the firing of the one o'clock gun. which was originally used to assist mariners on the firth of forth and to allow the townspeople of Edinburgh to adjust their clocks. the fortress itself holds many attractions which include the honours of Scotland ,the Scottish crown jewels, ad the stone of destiny.

Camera Obscura show is a fascinating and highly amusing way to see the city and learn about its history. The mechanics of the Camera Obscura are a cross between a giant pinhole camera and a periscope and your guide will tilt the mirror to give a 360 tour of Edinburgh and entertain you while telling stories of Edinburgh, past and present. Pick people up on your hands and even make the traffic climb over paper bridges prepared to be amazed at how, in this age of high technology, a simple array of mirror, lenses and daylight can produce this incredible panorama.

Our Dynamic Earth is among Edinburgh's best attractions and once inside visitors find themselves on an amazing journey of discovery awaits through time. First travel back in time to the big bang when the universe was first created and then move forward to the creation of the planets, the huge natural and geological forces that bring about changes in the landscape and how life evolved on earth. The last exhibition brings visitors to present day earth to explore the extremes of climate and conditions from the polar regions to the deserts and the tropical rainforest.

The Palace of Holyrood house is the Queens official Scottish residence and is located at the very bottom of the Royal Mile and opposite the Scottish Parliament. Situated next to Holyrood Park and Arthur's Seat, Holyroodhouse has provided the stage for many important historical events in Scotland's past. Visitors today can enjoy a tour of the Palace where a guide will take you on a tour of this royal residence. Climb the steep spiral staircase into Mary, Queen of Scots’ Apartments and view the Outer Chamber, an oak-panelled oratory, or prayer niche, that Mary would have used for her personal devotion.
Greyfriars Bobby is a statue that honours a devoted Skye terrier who mourned his master, standing guard over his grave in Greyfriars Kirkyard for 14 years.

At the Scotch Whisky Experience take a swirling, bubbling barrel ride through a replica distillery as you become part of the whisky making process. Along the way you will hear the stories behind this magical craft, with expert tour guides and whisky advisor's with you every sip of the way.

A whisky expert will show you how to nose and taste four single malt whiskies from each of Scotland's four main Whisky-producing regions: Lowlands, Highlands, Speyside and Islay. You are tutored through the five stages of appreciating Scotch Whisky: colour, body, nose, palate and finish. The tours finishes with a close-up look at the world’s largest collection of Scotch Whisky with a chance to taste Scotch Malt Whisky.
Situated within the Princess Street Garden is the Scott Monument which is the largest monument to a writer in the world. It commemorates Sir Walter Scott. There are 287 steps to the top of the Scott Monument, from where you can enjoy breathtaking views of the city Edinburgh and the surrounding countryside. Learn about the works of Sir Walter Scott and the monument in the museum room.
A good way to explore Edinburgh is to ride around the city on a tour bus. There are 24 stops around the city, including Edinburgh Castle, Greyfriars Bobby and Princes Street Gardens. Hop on and off where you choose to make the most of your time in this wonderful city.

Shopping in Edinburgh is an experience like no other explore Princes Street, George Street and the St James Centre while admiring fine architecture and striking views of the castle. Princes Street offers a blend of high street brands with famous department stores such as Jenners, an Edinburgh institution since 1938. The shops on George Street offer a stylish mix of sophisticated clothes, accessories and homeware alongside an exciting range of trendy bars and places to eat.

the name suggest is approximately one 'Scots mile' long. The road runs between two of the main locations in Edinburgh, Edinburgh Castle to Holyrood Abbey. The Royal Mile is an eclectic mix of shops, restaurants, pubs and historical monuments, as well as forming a major focal point for the annual Edinburgh Festival. 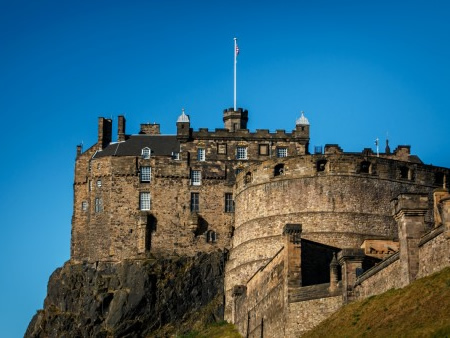