The old market town of Evesham is situated in the centre of the Vale of Evesham on the banks of the river Avon and is surrounded by the rolling Malvern and Breton Hills and the wooded slopes of the Cotswolds. Famous for it's fruit and vegetable growing it is know as the fruit basket of England. It is especially well known for the local asparagus grown there and they even hold an annual asparagus festival.

The River Avon meanders through the town and is an ideal setting for walking, cycling or for boating activities. There are parks and gardens on either side of the river and these provide the perfect place to relax or to hire a rowing boat to explore the town and surrounding villages.

The Battle of Evesham was fought on the 4th August 1265 and is where Simon de Montfort was killed Montfort rebelled against Henry III on what he saw as poor government and excessive spending on foreign wars. Monks buried some parts of his body in front of the altar of the Abbey and a memorial made from stone collected from the ruins of the Montfort castle in Lamaury can be viewed in the grounds. The Abbey Park borders the river and is a very popular place for picnickers who come to listen to the brass or silver bands on a summer Sunday afternoon.

The Almonry Museum and Heritage Centre is housed in the medieval home of the Benedictine Almoner who was responsible for the distribution of alms to poor pilgrims and inhabitants of Evesham. The exhibits take visitors from Roman settlements to the Battlefields of the English Civil War and to displays showing life in a Prisoner of War Camp.

The Evesham Arts Centre offers a wide variety of entertaining events from ballet to pantomime and from stand-up comedy to brass bands. It is the principle forum for music theatre and cinema.

Designated as An Area of Outstanding Beauty The Cotswold Hills extend over 60 miles and are scattered with picturesque towns and chocolate box villages. There is a wealth of history and interesting places to visit including magnificent castles, stately homes and beautiful gardens.

The prosperity of the area is linked to the wool trade and the wealth from the wool trade provided the area with many fine churches One of the most distinctive features of the Cotswold is the dry stone walls and the mellow honey coloured villages which are built from limestone which has been quarried there for centuries.

Gloucester And Sharpness
Stratford Upon Avon 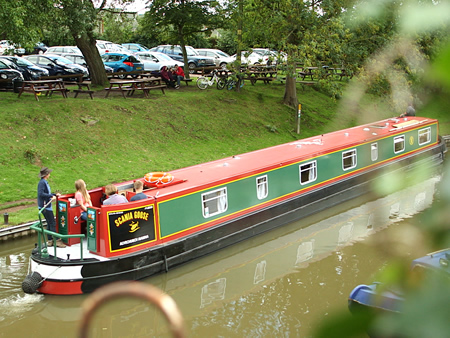