COVENTRY AND RETURN FROM GAYTON

Cruise to the city of Coventry.

Very rural route with small canal villages and pubs scattered along the way.

The old Coventry Cathedral was destroyed during World War 2, but the new cathedral was completed in 1962, and is worth a visit.
The Museum of British Transport is south of the canal basin, and claims to be the largest collection of British made transport in the world.

Rugby is a large town with many shops and of course is the home of the game of Rugby. It is 30 minutes walk to the town centre.
The centre of Rugby is a very pleasant place offering nice parkland and places to eat and drink in abundance. There is a pedestrianised shopping centre and an open market with a town crier.
The Web Ellis Rugby football museum tells the story of the game of Rugby over the last 160 years. 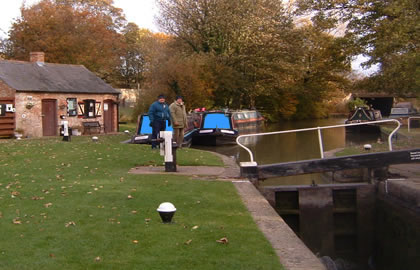 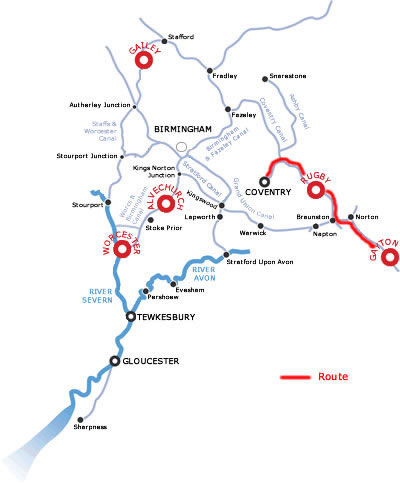 A short while after leaving Weedon you will pass Brockhall Park on your right, (access from Bridge 18). The Hall here is Tudor in part, and in the Victorian courtyard farm buildings has been established The Heart of the Shires Shopping Village. The Shopping village has about 25 widely ranging shops, including a tearoom, so is well worth a visit.
The canal continues through open landscape until you begin the climb up to the Norton Junction through a series of 7 locks called the Buckby locks.
The New Inn is canalside at Buckby Top Lock, with canalside seating and moorings. It is 5 hours 20 minutes from Gayton marina to here, or 3 hours from Weedon to here. At Norton Junction you can then go down the Grand Union west towards Braunston.From Norton Junction to Braunston the canal runs westward through hills and wooded country, then into a wooded cutting which leads to Braunston Tunnel.

Off to the north on your right you will pass the small village of Welton on a hill. At Bridge 6 ¾ mile from the Canal you can find a 400 yr old pub – The White Horse Inn.

At Braunston Turn turn right up the Oxford canal, the canal runs through wide open country for quite a mile, only momentarily interrupted by the M45 just after Barby Bridge.
Continuing up the Oxford canal Rugby comes in to sight, you descend the Hilmorton Locks and the canal swings in a wide arc around the town. There are shops near bridge 59 to the south, and a picnic area below bridge 58 with a huge Tesco supermarket nearby.

MOOR UP NEAR HERE, IT IS 9.5 HOURS FROM WEEDON

Rugby is a large town with many shops and of course is the home of the game of Rugby. It is 30 minutes walk to the town centre.
If you need to stock up on provisions, the selection of shops to supply food is brilliant in Rugby, offering deli’s, supermarkets, organic shops, local produce, bakers and butchers, and making it worth a look just for the shopping opportunities alone. The centre of Rugby is a very pleasant place offering nice parkland and places to eat and drink in abundance. There is a pedestrianised shopping centre and an open market with a town crier.
The Web Ellis Rugby football museum tells the story of the game of Rugby over the last 160 years

As part of your tour of the birthplace of the game be sure to take a walk along the Pathway of Fame, a unique tour which celebrates the history of the game and some of its most notable players.
The town and borough has much more to offer than its unique connection with the famous game. It has links to great literary figures such as Rupert Brooke, Matthew Arnold and Lewis Carroll.

Soon you will encounter the short Newbold Tunnel. Newbold Quarry park is beside the canal, it is a local nature reserve, there are wildflowers, butterflies & birds and muntjac deer.
The canal continues on this lock free stretch with no villages to speak off, until you reach Brinklow which is about a mile off to your left by Stretton Stop, where you can moor up for the night.

There are 3 pubs in Brinklow which can be accessed from the road to your left just before Stretton Wharf. There are stores & a takeaway as well.

The canal continues north west through quiet farmland only briefly interrupted by the motorway which is soon left behind for the moment. There are lovely elegant iron bridges along the canal.
Soon the first signs of Coventry appear, sharp bends in the canal lead to the stop lock before Hawkesbury Junction which is the end of the Oxford canal before it joins the Coventry canal. The lock has very little difference in depth, so takes very little time to fill up or empty!

There is a lovely cast iron bridge after the lock, and to your left is a very attractive disused engine house. The steam engine used in the Engine house was installed in 1821, having been previously used for nearly 100 years at a colliery. The atmospheric steam engine is now housed in Dartmouth Museum. There is also a nice pub canalside- the Greyhound, decorated with canal memorabilia.

You will be turning a sharp left onto the Coventry canal towards the city.

Just beyond bridge 2 before are 'Cash's Hundred Houses', an elegant row of weavers houses. The weavers slept on the 1st 2 floors, and the looms occupied the top floor. Only 37 of the houses remain.

The end of the Canal at Coventry basin is very interesting on the side of a hill, overlooked by attractive wooden canal warehouses. The Old weighbridge office is now a shop and information centre. The basin is home to shops, small businesses and an art gallery and has a welcoming
community of boaters. A canalside walk is ideal for spotting wildlife.

A footbridge over the ring road gives access from the basin to the town centre, with shopping, eating and drinking possibilities. Coventry Art Gallery, the Museum of British Road Transport and Sir Basil Spence's remarkable Coventry Cathedral are also nearby.
The Basin features a bronze statue of the famous 18th-century canal engineer James Brindley - one of fifteen artworks commissioned from local artists for the Canal Art Trail which extends from the basin to Hawkesbury Junction.

The old Coventry Cathedral was destroyed during World War 2, but the new cathedral was completed in 1962, and is worth a visit.
The Museum of British Transport is south of the canal basin, and claims to be the largest collection of British made transport in the world, with over 200 cars, 90 motorbikes, and 230 cycles, also period street scenes, royal vehicles and the awesome Thrust SSC -the world land-speed record holder.

It is 8 hours cruising to here from Rugby.