The Coventry Canal forms part of the Leicester Ring including The Trent and Mersey Canal, The Grand Union, Leicester Section, Canal and the North Oxford Canal.

The Coventry Canal opened in 1769 and was constructed to join the vast expanding city of Coventry with The Trent and Mersey Canal. The Canal was once busy with narrowboats carrying coal but commercial traffic ceased soon after World War II. The Canal is surprisingly rural and has recently seen an increase in the amount of narrowboat craft enjoying the route

Tamworth - A short walk from the towpath leads you to the pleasant town of Tamworth where you will discover 'The Snowdome' a fun packed family attraction where you can learn to ski or toboggan on real snow on the impressive 170 metre slope.

Tamworth Castle - Located in the town centre next to the River Tame the castle has existed since Anglo Saxon times. Take a tour of the castle and journey through time starting at the Medieval Dungeons, not for the feint hearted though as Tamworth Castle is said to be home to many ghosts and spirits.

Farmers Bridge Flight - This flight was provided with gas light for night working and the narrow boats navigated through them 24 hours a day, 7 days a week and at one time was the busiest flight on the canal system.

Atherstone - A pleasant market town within easy reach on the Coventry Canal and reputed to have the most pubs on any High Street in Britain the Atherstone Locks consists of 11 locks and are spread out over two miles.

Hawkesbury Junction - Walk the art trail for a magnificent 5 miles and follow a series of sculptures along the Coventry Canal. Nearly 40 works of art adorn the route and the information boards on route tell the story of history of the canal.

Coventry canal basin - With visitor moorings the Canal Basin offers tranquil surroundings but is only a stone throw from central Coventry. Browse around the shops and craft workshops or stop at one of the many delightful cafes or bars. 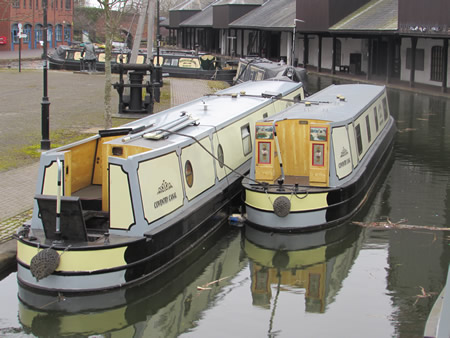