CROPREDY AND RETURN FROM GAYTON 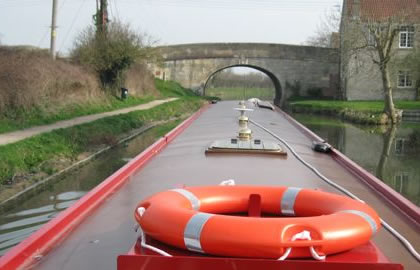 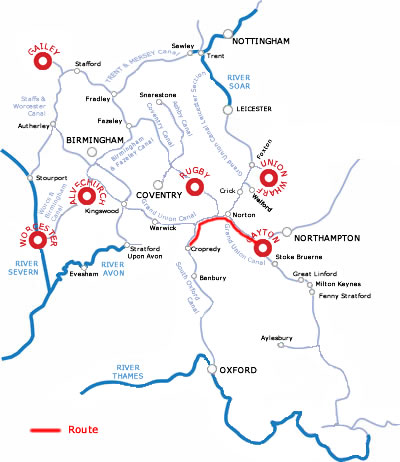 A short while after leaving Weedon you will pass brockhall Park on your right, (access from bridge 18). The Hall here is Tudor in part, and in the Victorian courtyard farm buildings has been established The Heart of the Shires Shopping Village. The Shopping village has about 25 widely ranging shops, including a tearoom, so is well worth a visit.

The canal continues through open landscape until you begin the climb up to the Norton Junction through a series of 7 locks called the Buckby locks.
The New Inn is canalside at Buckby Top Lock, with canalside seating and moorings.

At Norton Junction you can then go down the Grand Union west towards braunston.

From Norton Junction to braunston the canal runs westward through hills and wooded country, then into a wooded cutting whichs leads to braunston Tunnel.
Off to the north on your right you will pass the small village of Welton on a hill. At bridge 6 ¾ mile from the Canal you can find a 400 yr old pub – The White Horse Inn.
braunston Tunnel was opened in 1796 & is 2042 yards long.

Long rows of moored craft flank the canal, but there is usually plenty of places to moor, as it is worth strolling into braunston as there are a fine selection of old buildings here. The british Waterways office in the Stop House, was originally the Toll office between the Oxford and the Grand Union canal. By lock 3 there is a haunted pub- the Admiral Nelson. In braunston itself there is the Wheatsheaf which also has a Chinese & Thai takeaway. The Millhouse Hotel has a canalside garden, and the Old plough in the High street dates from 1672. The village has stores & a takeaway.

It is 6 hours cruising from Weedon to braunston.

At braunston Turn turn left at the junction, the canal now passes open countryside with a backdrop of hills, there are no locks or villages and you continue on until you reach Napton Junction. You will be travelling north at this junction, but if you want a nice pub to stop at for the night, it is worth continuing left down the Oxford canal to bridge 111, as the haunted pub The bridge at Napton is by the bridge. Best access to the hilltop village is by bridge 110, the village is scattered all over the hill, but the pubs and shops are at the bottom.
It is 8 hours cruising from Weedon to Napton

The Oxford canal continues a very twisting path through countryside with occasional villages dotted around.
After leaving Napton, head south along the Canal, there is a useful shop by bridge 113.

Cropredy itself is soon reached, the whole village is close to the canal, and is the home of the Annual Cropedy Folk festival in August. There are a couple of pubs in the village, and nearby was fought the Battle of Cropredy in 1644, where the Royalists defeated the Roundheads and thus protected Oxford.

It is 10.5 cruising hours from Napton to Cropredy.

You can turn around at Cropredy and slowly make your way home.