Warwick, the county town, is famous for its magnificent castle and historic charm.

There are many attractions and museums to visit in Warwick as well as beautiful parks and gardens and charming buildings of outstanding quality from every period from the last thousand years.

Visit Warwick Castle, where you’ll be surrounded by jaw dropping history, magic and myth and adventure! It is possibly the finest medieval castle in the country. It is open all year, except Christmas. See the Kingmaker Exhibition, which uses wax sculpture to recreate the preparations for battle in 1471, as well as the dungeons, ghost tower, and sumptuous state rooms.

Close to the town centre, Warwick Racecourse is one of the oldest in the country and retains its historic charm and character. It offers a full programme of jump racing from September to May. 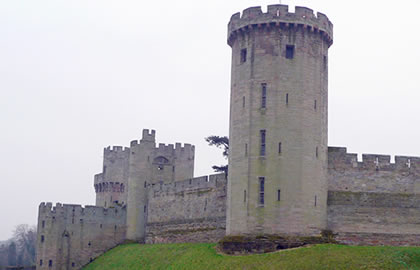 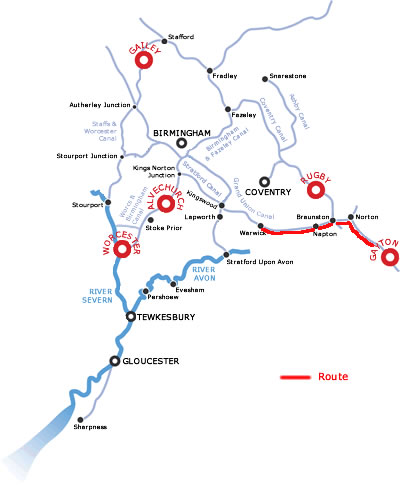 The canal continues through open landscape until you begin the climb up to the Norton Junction through a series of 7 locks called the Buckby locks.
The New Inn is canalside at Buckby Top Lock, with canalside seating and moorings.

At Norton Junction you can then go down the Grand Union west towards Braunston.

From Norton Junction to Braunston the canal runs westward through hills and wooded country, then into a wooded cutting which leads to Braunston Tunnel.
Off to the north on your right you will pass the small village of Welton on a hill. At Bridge 6 ¾ mile from the Canal you can find a 400 yr old pub – The White Horse Inn.

At Braunston Turn turn left at the junction, the canal now passes open countryside with a backdrop of hills, there are no locks or villages and you continue on until you reach Napton Junction. You will be travelling north at this junction, but if you want a nice pub to stop at for the night, it is worth continuing left down the Oxford canal to bridge 111, as the haunted pub The Bridge at Napton is by the Bridge. Best access to the hilltop village is by Bridge 109 the village is scattered all over the hill, but the pubs and shops are at the bottom.

It is 7 hours cruising from Weedon to Napton

Next morning turn your boat around as you are headed back to the Napton Junction, where you should turn left as the Grand Union continues northwards.
The agricultural landscape continues, interrupted only by the 3 locks at Calcutt, although soon you will reach the Stockton locks, a group of 8 locks, with 2 more fairly shortly afterwards. The Boat Inn besides Bridge 21 can provide refreshment just before the locks, and the Blue Lias Inn is just after them by bridge 23. There are old blue lias quarries around here and huge fossils have been found from the Jurassic period in the blue lias clay.

In the village of Long Itchington there are 2 canalside pubs on either side- The two Boats Inn and the Cuttle Inn. There are stores and a garage in the village.
The canal continues to fall away on its journey to Warwick, and of particular interest are the top 2 locks at Bascote which form a staircase.

The isolated countryside ends just after Bridge 35, where the canal carves a fairly discreet course through Leamington Spa. The town is largely mid-Victorian with long rows of elegant houses. The assembly rooms, Art gallery & museum are worth a visit at the Royal Pump Rooms in the Parade www.royal-pump-rooms. Tourist information Tel 01926 742762,. There are a variety of pubs & shops and a supermarket not far from the canal.

Leamington & Warwick are hardly distinguishable, but the best pace to moor to walk ½ mile or so into the town centre, is by Bridge 49.
Warwick was virtually destroyed by fire in 1694, but there are some medieval buildings remaining, which mix with the 'newer' Queen Anne styles. Warwick is a lovely little town & you can get all your provisions here.
Warwick Castle is well worth a visit and is possibly the finest medieval castle in the country, it is open all year except Xmas, see the Kingmaker exhibition which uses wax sculpture to recreate the preparations for battle in 1471, as well as the dungeons, ghost tower & sumptuous state rooms.

The Warwick County museum in the Market Hall houses a tapestry of Warwickshire dating from 1588. The Lord Leycester Hospital is a superbly preserved group of 14th century timber framed buildings.

It is about 9.5 hours cruising from Napton to Warwick.

Cruise back to Gayton Marina