STAFFORDSHIRE AND WORCESTERSHIRE COUNTRYSIDE FROM STOURPORT ON SEVERN

Secluded woodland and pretty locks , very pretty villages like Kinver, with its fascinating Rock houses, carved out of the cliffs and in continuous occupation for 150 years until 1935, also Brewood, and Wheaton Aston. 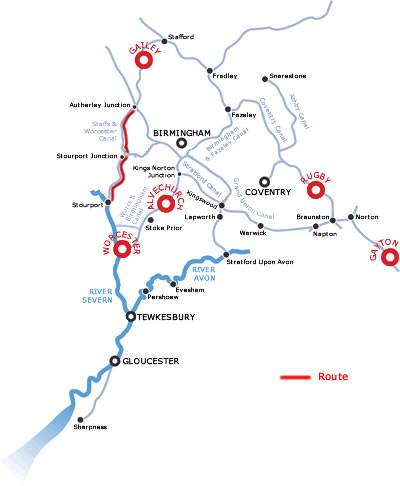 You pass by the Stourbridge Canal and at the far end of the aqueduct near here is a curious narrowboat-house known as the Devil's Den, cut into the rock. Further on after Rocky Lock rooms have been carved into the sandstone.

The canal forks and you should keep left to avoid the marina, the countryside becomes flatter and more regular. Moor before Greenforge Lock, the Navigation Inn is canalside .
It is 6.25 hours to here.


There are occasional locks and canalside pubs including a 2 step staircase at Botterham lock which has 4 locks in total.

After Bumblehole Lock you reach the 3 Bratch Locks just north of Wombourne. These locks are open from 8am to 8pm and you should carefully study the operating instructions before use, or consult the lock-keeper if in any doubt.

Wightwick manor is about 300 yards north west of bridge 56 across the busy road and up the hill. It is National Trust , and has many William Morris wallpaper and fabrics, and beautiful 17 acre Edwardian gardens.
Moor here for the night, the Mermaid Pub is 100 yards west of bridge 56.
It is 5.5 hours to here

The Shropshire Union canal, or The Shroppie, starts the journey at Autherley Junction (turn sharp left) in the outskirts of Wolverhampton, known to the working boatmen as “Cut End” due to it being where the Shroppie met the much older Staffordshire and Worcestershire Canal, Autherley Junction was once a busy place with workshops, a toll office and stables, today Autherley has a boatyard with a hire fleet and a club house. Many of the original buildings still exist and it is home to Bridge #1 on the Shroppie which is an original design by Thomas Telford.

There is also the original shallow stop lock where Sam Lomas used to control boat movement and issue toll tickets. The lock has a drop of 1 inch, meaning no drop at all, so was purely used for Lomas's financial motives. Autherley is very attractive and full of canal history and it is worth giving yourself some time to look around!

Chillington Hall, close to the village of Brewood (pronounced Brood), is home to the “Fancy Bridge” named by the workers who built the Shroppie. Powerful landowners demanded grand and ornamental bridges where the canal crossed their properties and this is a fine example of such work. A tree lined avenue crosses the canal here leading up to Chillington Hall which is now a venue for Weddings.

Just a short distance upstream from Chillington Hall is Brewood and you will find shops, pubs and restaurants close at hand and there is also a boatyard all of which should meet any of your requirements. Just beyond Brewood you will see the Belvide Reservoir which supplies water for the canal. A very short distance from there is a cast iron aqueduct, the Stretton Aqueduct, which was built in 1832.

It is used to cross the A5 Watling Street and take you onwards to Wheaton Aston where you will find the first lock on the Shroppie other than the stop lock at Autherley. The Wheaton Aston lock is unique by way of being the only singular lock on the canal route as the other locks are bunched together in "flights". This made for quicker working by the boat people because locks could be easily prepared in advance of the boats. At Wheaton Aston you will find a waterside garage that offers some useful facilities for boaters and a canalside pub. Wheaton Aston also has a few basic supplies.

Turn at Wheaton Aston winding hole, moor for the night it is 5.5 hours to here