STAFFORDSHIRE AND RETURN FROM WORCESTER

Passing through Worcester by canal, you join the River Severn for a leisurely cruise up to Stourport where you join the Staffordshire and Worcestershire Canal.

Here you will appreciate the contrast between the wide river and the more intimate atmosphere of the canal, which threads its way unobtrusively through the landscape, encouraging you to stop at will.

This canal takes you north past dramatic sandstone rocks and through the beautifully preserved Bratch locks.

The Severn Valley railway is a full-size standard-gauge railway line running regular steam-hauled passenger trains for the benefit of visitors and enthusiasts alike between Kidderminster in Worcestershire and bridgnorth in Shropshire, a distance of 16 miles. 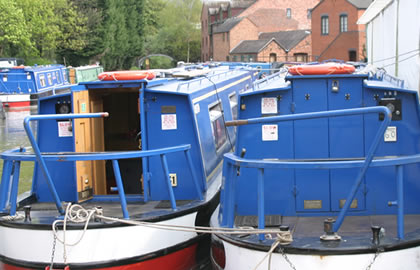 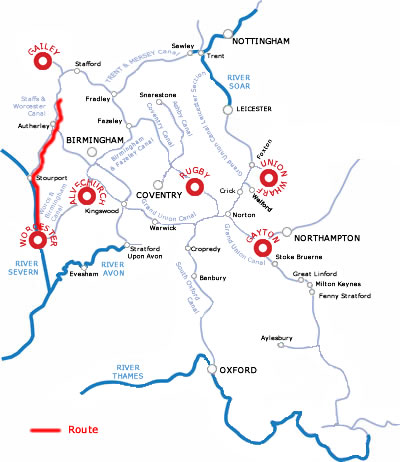 Turn right out of Lowesmoor wharf down the Birmingham & Worcester canal & soon you will encounter 2 locks, one called Blockhouse lock, followed by Sidbury lock. which will get you into the swing of things. It takes about an hour to get to Diglis basin, and if time is passing it is best to stop there for the night, and then you will have time to explore the city of Worcester. There is a water point just above Diglis lock.

The marina is a short walk from the City centre, where you can explore the lovely cathedral dating from 1074. There is a wealth of stained glass and monuments to see including the tomb of King John. Also a good place to visit is the Museum of Worcester Porcelain, which not surprisingly has the largest collection of Worcester Porcelain in the world. The Guildhall in the High street was built in 1721 and has a fantastic elaborate facade with statues of Charles I and II and Queen Anne.

In Friar Street is Greyfriars, dating from 1480, this was one part of a Franciscan priory, and is one of the finest half timbered houses in the country. Charles II escaped from this house after the Battle of Worcester in the civil war in 1651. In the George Marshall Medical museum you can meet the past heroes of medicine. Regular bus service from Crowngate Bus station.

Close to Sidbury lock is the Commandery Civil war Centre, a museum devoted entirely to the story of the Civil War. The museum dates from the reign of Henry 8th and served as Charles 11's HQ before the Battle of Worcester in 1651.

From Diglis basin you enter the Diglis locks- 2 deep locks which take you out onto the River Severn. The locks are under the supervision of the lock-keeper, who should tell you whether it is alright to proceed onto the River Severn, but to make sure look out for the red, amber and green water level gauge to see if the Severn is in flood or not.

After coming out of the last lock onto the Severn, it is best to head towards the far bank heading south(in the opposite direction to which you will be headed) and then turn the boat to pick up your crew from the pontoon near the lock. So you do a half circle anti clockwise, the river is very wide so it is easy to do.

Heading upstream the River passes the imposing cathedral and then the fine five arched bridge. The famous racecourse is on your right, and there are moorings here, also a water point.

The River winds through pleasant countryside to Bevere lock, but just before here is the Camp House inn pub on your left, with moorings. If you moor on the River leave your rope loose because it is tidal.
Bevere Lock has a traffic light system,and when its green you can proceed into the lock which is all automated by overseen by the lock-keeper.

A mile beyond Bevere the river swings right, and soon you will see the entrance lock at the start of the Droitwich barge Canal. You do not turn off the River Severn however.

The River winds its way through the picturesque Worcestershire countryside, Holt Lock is also automated so look for instructions from the lock-keeper there.
You leave the River Severn at Stourport on Severn & join the Staffordshire & Worcestershire Canal.

This canal is one of the prettiest and most interesting waterways in England.

The canal basins at Stourport are full of pretty moored boats, there are 2 entrances to the basins from the Severn one through broad locks, and the second one through narrow locks which is the one you should take.

The locks are open 24 hrs, and form a staircase, the lock-keeper is usually around in case of difficulties. You should proceed to the eastern corner of the upper basins to join the Staffs & Worcs canal. There is a useful tea room & craft shop by the lock and temporary moorings.
It is 7 hours to here from Diglis Basin

You soon leave Stourport behind and approach Kidderminster with its smart new developments.

In Kidderminster there are good moorings at Weavers wharf , with supermarkets & cafes nearby.

It is 2 hours cruising to here from Stourport on Severn .

Take a train ride on the Steam Railway from Kidderminster station off to your right from Bridge 15 Caldwall hall Bridge.

The Severn Valley railway is a full-size standard-gauge railway line running regular steam-hauled passenger trains for the benefit of visitors and enthusiasts alike between Kidderminster in Worcestershire and bridgnorth in Shropshire, a distance of 16 miles. The train journey is full of interest, for the route follows closely the meandering course of the River Severn for most of the way on its journey between Kidderminster and bridgnorth. One highlight of the trip is the crossing of the River Severn by means of the Victoria bridge - a massive 200-foot single span, high above the water which, incidentally, features in the film 'The Thirty-nine Steps' with Robert Powell in the leading role. There being few roads in the Severn Valley, some of the views are only visible from the Railway. The scenery is varied and largely unspoiled, punctuated by the quaint 'olde worlde' charm of country stations, each one giving ready access to local villages and riverside walks.

Why not disembark at Bewdley & take a trip to the safari park with it's free roaming giraffes, elephants & big cats and small theme park with over 20 rides. Bewdley is a magnificent small 17/18th century riverside town, & is well worth a visit.

Leaving Kidderminster behind you soon enter the open countryside again, until the canal is encroached by trees and cliffs which make you feel you are in the jungle. At Debdale lock a doorway reveals a cavern cut into the solid rock, which may have been used to stable towing horses.

The canal continues through secluded woodland and pretty locks to the very pretty village of Kinver, where you can stock up on provisions or get some fish & chips! It is worth having a look at the fascinating Rock houses, carved out of the cliffs and in continuous occupation for 150 years until 1935.
Walk up Stone lane close to the White Hart Hotel until trees appear on your left, then follow the path into the trees, the rock houses are at Holy Austin Rock.

Beyond Hyde Lock the canal wanders along the edge of the woods and the sandstone is supported on brick pillars as it has eroded away. The lovely Dunsley tunnel has been hewn out of the rock, and is just 25 yards long.

Look out for the Toll house at the next lock- Stewponey, and the interesting wharf.
Just across the river from the wharf is the impressive bulk of Stourton castle which was the birthplace of Cardinal Pole a friend of Mary Tudor in 1500, it is now privately owned.

You pass by the Stourbridge Canal and after the aqueduct is a curious narrowboat house cut into the rock called Devils Den.

After Rocky lock there are rooms carved into the sandstone and the canal forks to a private basin, keep left.

The countryside becomes flatter and more regular, with a few locks here & there.
You can moor in Greensforge , there is not much here but the Navigation Inn is canalside.

It is 8.5 hours from Stourport to here

In the village of Swindon, there are a couple of pubs, stores & takeaway here.

After Marsh Lock on the outskirts of Swindon, you reach the Botterham locks, 4 locks including 2 staircase locks
There is a pub by bridge 43 and a few shops to the north east of bridge 44 in Wombourne.

After Bumblehole Lock come the curious set of 3 locks called Bratch locks. These locks are open from 8am to 8pm and you should carefully study the operating instructions before use, or consult the lock-keeper if in any doubt.

The Octagonal toll house, lovely setting and unusual layout of the locks make an interesting view, but just treat each one as a separate lock & you should be OK.
It is 4.5 hours from Greensforge to Dimmingsdale Lock Bridge where you can turn your boat and make your way back to the marina.
It is 3.5 hours back to Swindon where there are a couple of pubs to refresh you!