BATH AND RETURN FROM BRADFORD ON AVON

You can do this route from :
Bradford-on-Avon Marina.

A very relaxing easy cruise with only one lock each way, giving you time to chill and explore !

The medieval town of Bradford on Avon with its Weavers' cottages clinging to the side of the Avon valley, looking down across the old mills to the 'Broad Ford' on the river that gave the town its name.

If you moor at the top of the Bath locks you can walk into the city from there. 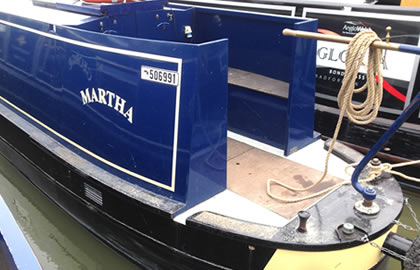 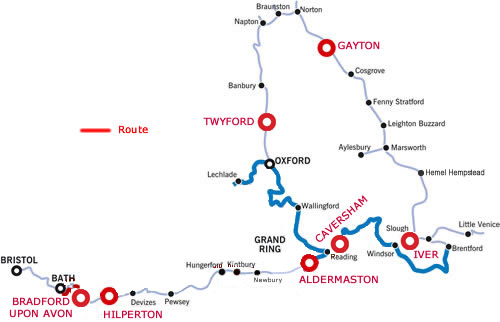 Turning left out of the Marina within a mile you come to your first lock at Bradford on Avon, this where all the training you have been given kicks in, and you try and remember what you have been told!
Its not difficult, you just have to take your time and get all your crew out with their windlasses to help.
Once through the lock you now have no more locks to negotiate until you come back, some your crew can make a cup of tea!
Bradford on Avon to the North of the canal, is a lovely town, one of the beauty spots of Wiltshire, and one of the highlights of the Canal. It is a miniature Bath, rich with architectural treasures from the Saxon period to the 19th Century. Bradford upper Wharf is very attractive, with a small dock with some of its original buildings still standing, and an old canal pub by the lock. The town centre is very compact, you can walk down the hill from the Canal wharf. There is also a swimming pool near the canal. The Great Tithe barn stands below the canal embankment and is one of the finest in the UK, dating from the 14th century with a massive cathedral like structure. The splendid 9 arch Town Bridge is very unusual as it has a chapel in the middle, dating from medieval times, but used during the 17th & 18th centuries as the town prison.
You can moor here for the night if you were late in starting off.
Westwood manor lies 1 mile south west of Bradford on Avon, a 15th C stone manor house open through the National Trust.
If you want to stop at one of the best pubs on this navigation then continue to the Avoncliff Aqueduct, where the Cross Guns is in a lovely setting, right by this major aqueduct, there also a Tea room, the River Avon rushes by below you.
It is an hours cruising to here.

Bathampton & Bathwick are on the outskirts of Bath, if you want to avoid the Bath Locks the best place to moor up for Bath is at the top of the Bath Lock, Mooring here puts you in line with the rooftops of the city and an enjoyable walk away from the city centre.
Cruising into Bath is like gliding into Regency Britain.
Continue to Cleveland House Tunnel, and moor past there, you have turn (wind) your boat at Sydney Wharf Winding hole.
It is 2.45 hours to here from AvonCliff Aqueduct

Day 3
You can spend the morning exploring Bath here is so much to see.

In the afternoon you can start the cruise back to Bradford on Avon which is 3-4 hours away, and perhaps spend your last evening in Bradford on Avon before returning the boat to the marina tomorrow